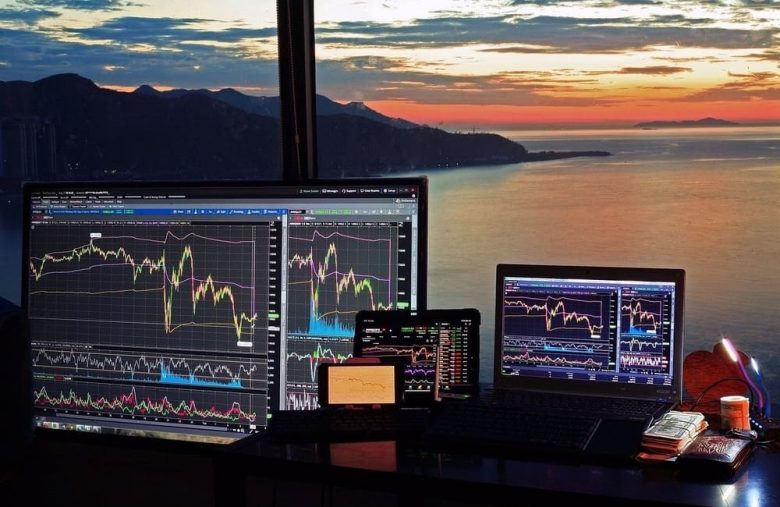 In the last two weeks, bears gained complete control of the market. This was responsible for the more than 5% drop in the price of most digital assets during the past intraweek activity.

Coupled with that, the the world’s largest cryptocurrency network, Bitcoin (BTC), had to undergo a major test after Kazakhstan experienced a nationwide internet blackout that led to up to 15% of Bitcoin’s global hash rate going offline. Bitcoin was already in bearish mode before then and didn’t have much to lose as the network easily recovered from the hash rate drop.

Things have improved in the past seven days with the market undergoing recovery from recent lows. With many cryptocurrencies seeing little more hikes and minimal retracements, the crypto market has witnessed some stability. The market closed the period at $1.96 trillion but is estimated at $2.02 trillion as of the time of writing.

However, the fact remains that the market is still in a bearish phase with most cryptocurrencies testing critical support levels. The image below further illustrates the extent to which these projects are dip into bearish dominance. 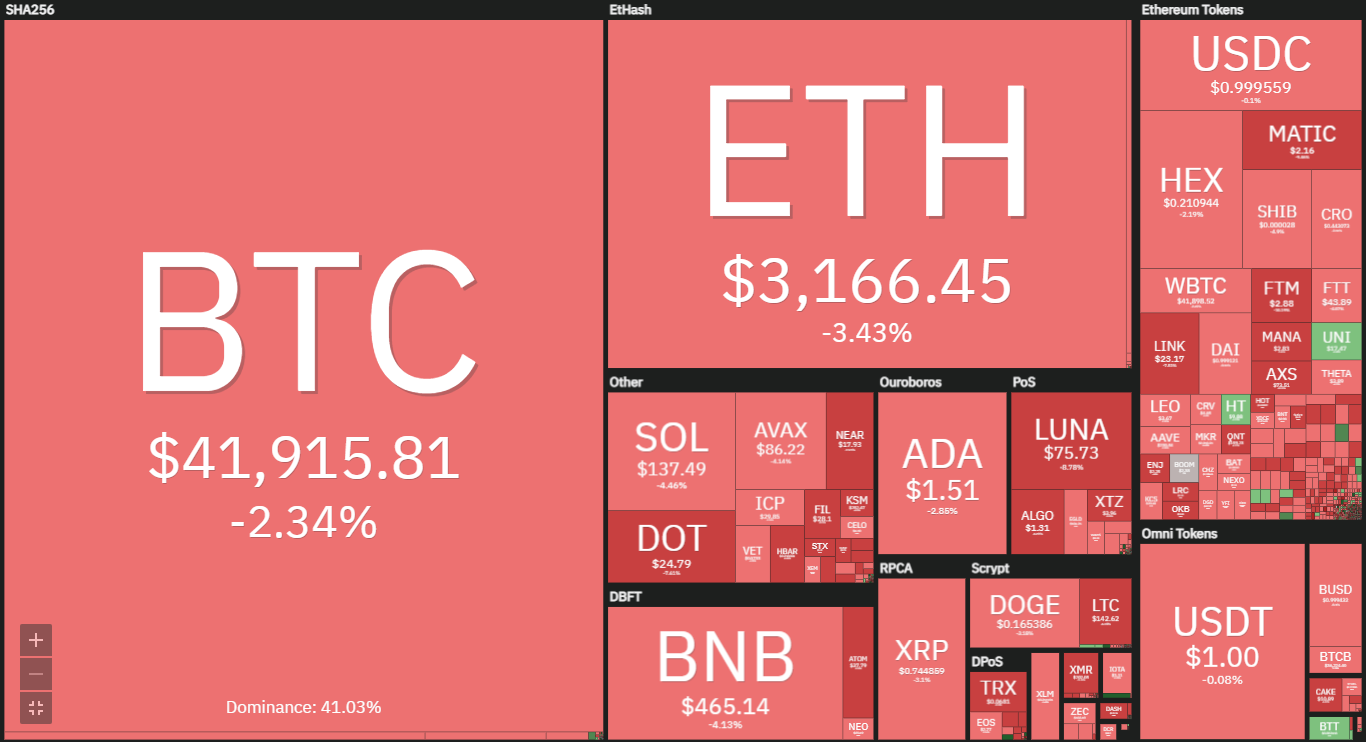 The Crypto Fear and Greed Index throughout the past week was fairly stable as the readings surfed between 21 and 23. At the time of writing, the metric is 24 despite the depreciating value of the industry. With macro trend traders expecting a further decline, many others are concerned we may not see a change in the current market trajectory.

As long as market conditions remain relatively stable, we anticipate the below listed cryptocurrencies with be among the top five to keep an eye on this week.

Bitcoin opened the last seven-day period at $41,853 and surged to an intraweek high of $44,456. The digital asset closed at $43,107 which suggests that the top coin gained less than 3% at the end of the timeframe under consideration.

BTC dipped below $40,000 during that time but recovered. We note how the cryptocurrency remained above $41,000 after ascension to the time of writing. The $41k support is one critical level to look out for as the bulls may continue defending the mark.

Currently trading at $41,700, bitcoin seems to have hit support it rebounded at $41,600. The most recent test makes it the second time the digital asset is testing the mark. With increased selling pressure, the support may give way and the largest cryptocurrency may dip as low as $39k before the end of the week.

Fears of more bearish action were felt across the market as the apex coin experienced a death cross four days ago. This is also reflected in the Relative Strength Index (RSI) as observed in the decrease in the indicator and bitcoin may become oversold if current conditions do not improve.

In addition to the Relative Strength Index (RSI) reading, we also take into account the Moving Average Convergence Divergence (MACD). The chances of a massive uptrend is looking more bleak as the histogram associated with the metric suggests a gradual increase in selling pressure – hinting at more price correction.

Last week, we saw ETH dip to the lowest it has attained over the past 21 days. The coin saw a low of $2,926 as it suffered the biggest dip of the period under consideration on the first day of the week but saw little hikes that saw minimize the loss.

The coin no doubt saw a lot of volatility at the time and Ether gained 5% over last seven days as it opened at $3,151 and is about closing at $3,350. ETH correction yesterday was an indication of the bears in action. The cryptocurrency has dipped by more than 4%.

At the time of writing, ETH is still ravaged by corrections and struggling to find support. The $2,900 support has held out since August 2021 but may come under threat if the current downtrend does not stop. The strength of this support is yet to be tested as right-wing traders have successfully prevented a dip to that level. Nonetheless, the mark may continue to act as support through this week, provided market conditions soften.

FTM was one of last week’s top gainers. The cryptocurrency gained more than 30% at the time but is currently trading at $2.8 per unit. The $2.4 support has held out for more than five days and is considered bullish based on the pivot point standard.

The coin is not experiencing the same sentiment as the past week, as we noticed that it is down by almost 15%. Additionally, MACD histogram is displaying a gradual decrease in the buying volume which translates to the retracement the cryptocurrency is experiencing. Why is it on the list of cryptocurrencies to watch?

Based on market trends, we’ve seen weeks that started slow but got heated up as the week progressed. Having crossed the the 200-day roadblock, FTM will look to test $3.2. The FTM/USD pair will have to break the $3 resistance to hit this level

FTM is seeing a second day of price drop and may close the day with a red candle. The $26 support flipped once and was regained. Nonetheless, the candlestick pattern on the weekly chart suggests that the asset may recover as we observe a bullish engulfing.

As with most cryptocurrencies to watch this week, Harmony no doubt has seen a lot of volatility over the past week. The cryptocurrency saw gains of more than 20% at the end of the seven-day period. It hit a high of $0.38 and low $0.25.

As with the preceding, ONE is not experiencing the same sentiment as the past week, as we noticed that it is down by almost 15%. Additionally, MACD histogram is displaying a gradual decrease in the buying volume which translates to the retracement the cryptocurrency is experiencing. Why is it on the list of cryptocurrencies to watch?

The Moving Average Convergence Divergence (MACD) suggests an impending price dip as fast and slow lines may intercept in the next 24 hours. A massive dip may leave ONE looking to rebound at $0.29 as the coin remains in accumulation phase.

Nonetheless, the cryptocurrency is seeing a lot of corrections as it goes on its second consecutive day of losses. Will it continue? The weekly chart suggests that the coin may see further improvements in price in the coming days as the cryptocurrency experiences a bullish last two weeks and is showing no signs of a downtrend.

Following the below per performance in the last two weeks, Secret is one of the many coins in the top 100 that ended the past week in profits. The coin opened at $5.8 and closed at $8.8– a more than 49% increase.

The cryptocurrency is seeing a spillover of the past week’s sentiment as it is one of the few tokens experiencing an uptrend. The price hike started as soon as the intraday session began and has resulted in SCRT gaining  more than 5%.

Having seen a bullish divergence barely during the previous intraweek session, the asset is looking more promising and a good start to the the seven-day period will have prolonged effect on it. We may conclude that the SCRT/USD pair will experience surges as the week progresses.

This article highlighted five cryptocurrencies to watch this week. The above predictions coming true largely depend on market conditions remaining relatively stable for most parts of the next seven days, which of course is not guaranteed.  The volatile nature of the crypto space means investors and traders must do their own research and always keep an eye on the charts.