Top Five Cryptocurrencies to Watch This Week (May 23) 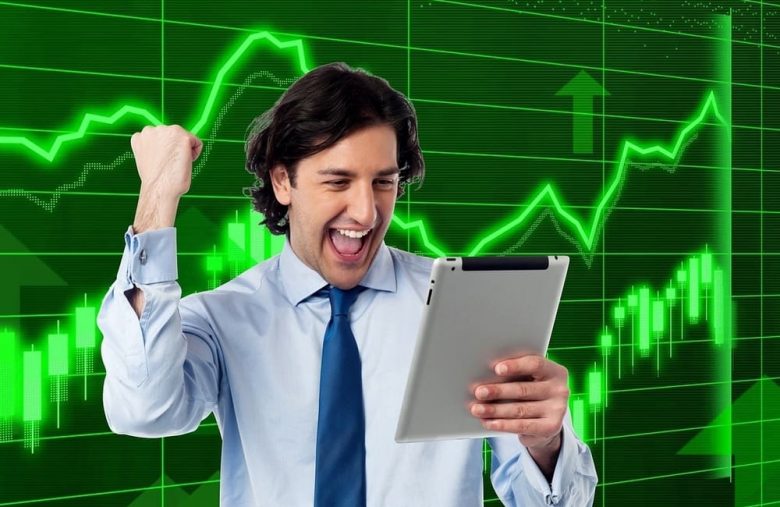 Nonetheless, there were notable improvements in the price of some cryptocurrencies. For example, KNC gained more than 63% during the period under consideration while GRT lost almost 19%. 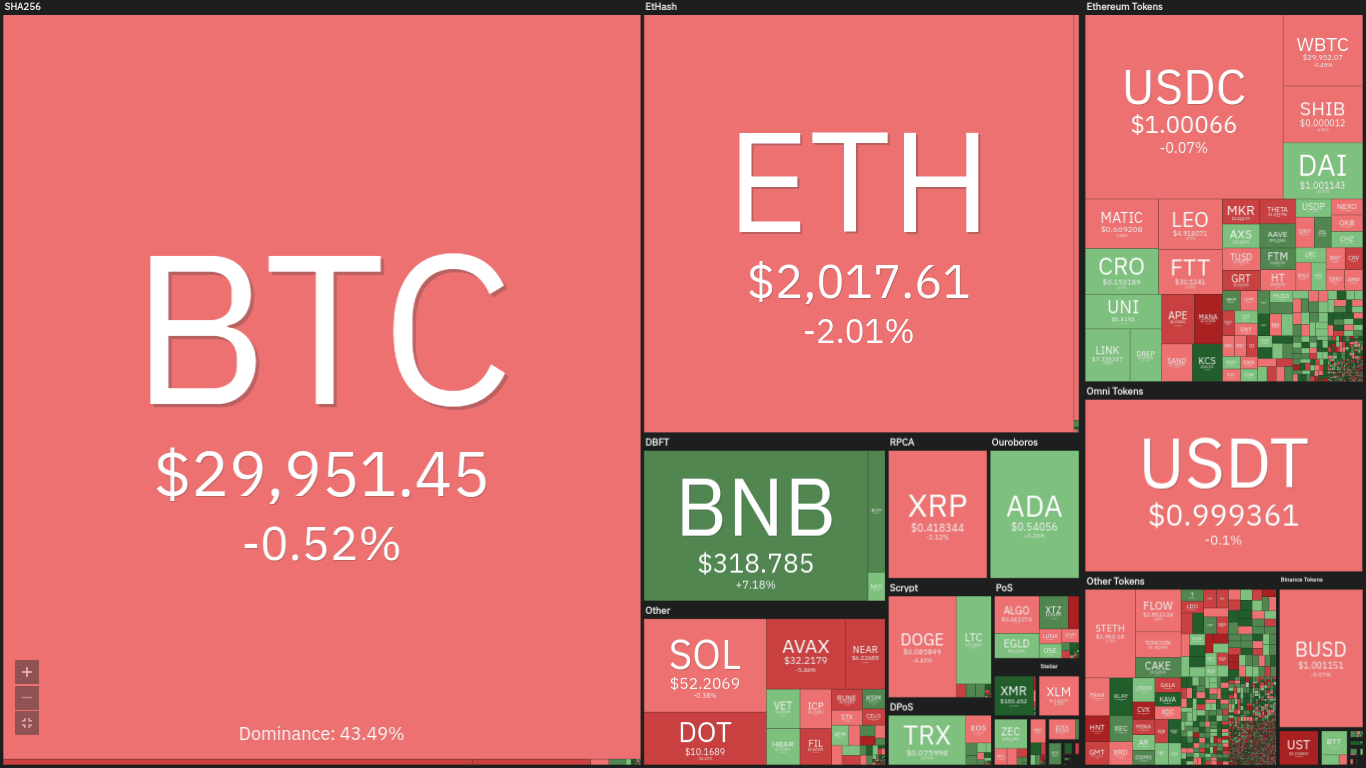 The image above further explains that the top gainer from last week is not the only coin that has seen a significant increase. BNB, ADA, TRX and some other altcoins also make up the lists.

However, there has been no notable change in market sentiment as the fear and greed index remains below 15 – an extreme fear. There were also no big stories that could change the trajectory of the market.

The new week is proving to be following the same path as there is nothing to talk about on the part of fundamentals. The previously highlighted metric also dipped as low as 10 after concluding the previous intraweek session at 14.

Currently at 12, most coins are yet to feel the impact as almost every cryptocurrency is down by a few percent. The image below further expresses the state of the crypto market. 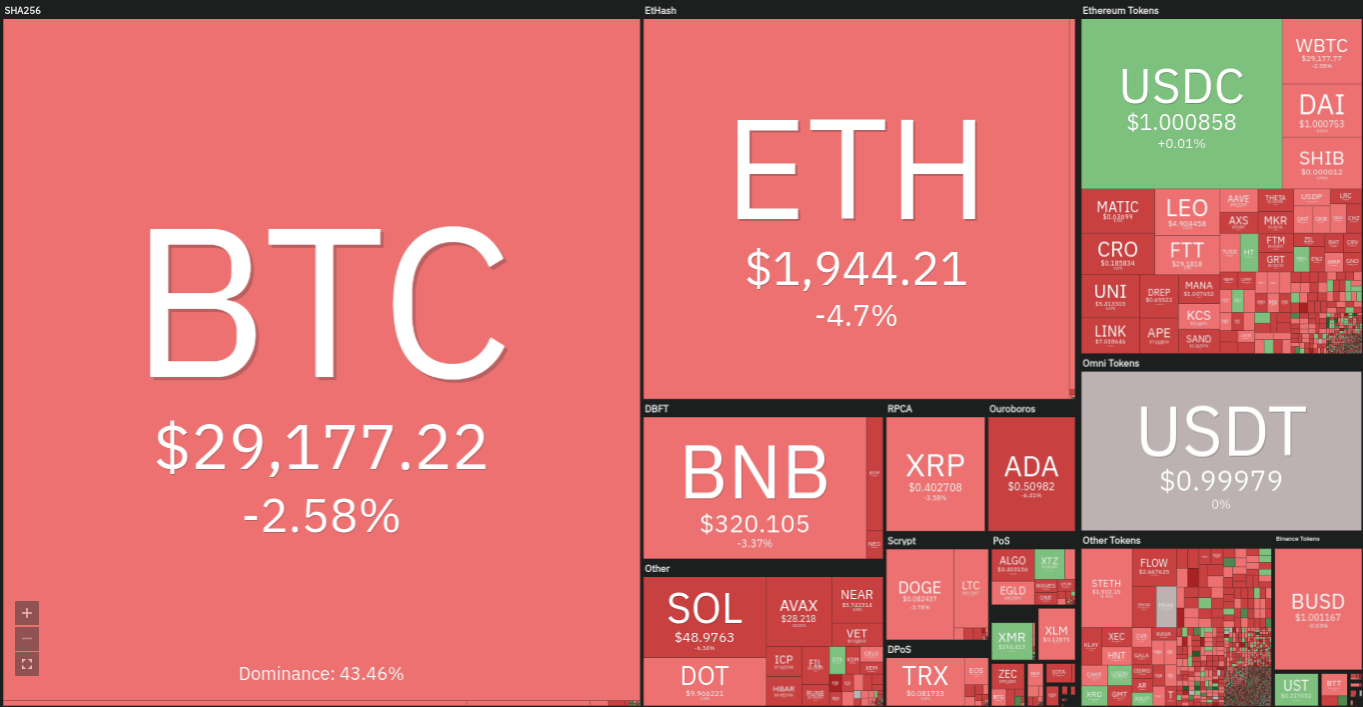 With a brief overview of the industry, will this current seven-day period be different? Here are the top five cryptocurrencies to watch

The previous intraweek session marked the eighth consecutive week of losses. On Monday, the coin was hit by the first wave of downtrends as it retraced from $31,275 to a close at $29,832, losing more than 4% of it value per unit.

The next day brought a little consolation as the apex coin saw some increase as it made an attempt at reclaiming $30k and was successful. However, it closed with a small profit and failed to record any significant increase.

Wednesday brought the biggest correction of the week as Bitcoin dipped from $30,670 and closed at $28,681. The two prices indicate a more than 5% decrease. The incurred losses were recovered the next day as the asset reclaimed the lost levels.

More retracement was seen on Friday as BTC lost 3.58%. Similar volatility during the week could not be sustained over the weekend as the apex coin saw little price movement. However, it gained 3.65%.

The seven-day period ended with bitcoin seeing little improvement with regards to indicators. The Moving Average Convergence Divergence (MACD) indicated that the top asset had a bullish divergence. Additionally, RSI was at 40.

Unfortunately, these metrics have changed as the Relative Strength Index is at 38 – an indication of a gradual decrease in buying pressure. The first level to watch is the second pivot point ($31,000). A flip of this level may ensure a close above $32k.

However, if the selling continues, BTC may retrace as low as $27,000. Bearing in mind the most recent price performance, a 3% – 5% decrease or increase may be seen.

Tuesday came with relief as TRX recovered the lost value. it saw a little retracement that saw it lose dipped as low as $0.068 but closed at $0.72, recording gains of more than 4%. The bears seized control of the market the next as it was represented by a red candle.

Seeing almost the same volatility as the previous session, the battle for dominance was fierce, but the selling congestion resulted in a 2.16% loss. Thursday came with a change in scenery as the bulls pushed tron to a high of $0.075 and closed at $0.073, a more than 3% increase.

Following the one day bullish, one day bearish trend, TRX lost almost 3% during the next intraday session. However, it recorded consistent gains over the weekend, seeing a 9% positive price change.

The increase saw RSI hit 55 and MACD, a bullish divergence. Following these indicators, we conclude that the asset under consideration may experience more uptrends over the next six days.

A bearish start to the week saw Tezos lose more than 6% as it opened trading at $1.92 and closed at $1.78. Gaining more than half the lost value the next day, further recovery was expected as the coin closed with a 4.49% increase.

However, this proved wrong as the altcoin saw its biggest dip on Wednesday. It retraced from $1.86 to a low of $1.66. It ended the period under consideration at $1.68, losing more than 9%.

A repeat of Tuesday’s price action played out again as the asset saw more demand concentration and a tight squeeze to $1.76 – a 4.76% gain. The next day was not volatile as the rest and XTZ failed to record any significant positive price change.

Saturday and Sunday saw the tezos enjoy more uptrends. it gained more than 13% collectively. The Relative Strength Index (RSI) peaked at 43 during this period. Additionally, the coin flipped its first pivot support.

The Pivot level is now used as support for further price increases. If the current momentum is maintained we may expect a retest of $2.2 resistance and a possible flip as the Moving Average Convergence hints at more price increase.

The Kyber Network Crystal saw a massive uptrend last week. It kicked off the seven-day period with an almost 8% decrease and was heading for further losses but found support at $1.52.

The next day marked a notable shift in dominance as the bulls rallied the coin. Opening at $1.65, the token surged to high $2.26 and closed at $2.18, gaining more than 30%. Wednesday came with a meager increase and more than the previous day’s volatility.

A bearish start to the intraday session started with the asset under consideration, losing almost 10%. However, it found support and rebounded at $2. A massive uptrend was seen that saw KNC hit a $2.75 and a close at $2.68 – a more than 20% increase.

The next three days were marked by Dojis which indicated little volatility. Nonetheless, the crystal peaked at 47 on the RSI scale and saw a bullish divergence on MACD. Taking into consideration previous price action, we may expect more changes in price.

The bulls will stage a comeback after a 15% decrease on the first of the current week. If the same momentum is sustained, a retest of the $3 resistance may take place.

Stacks is one of the top performing cryptocurrencies from the past week. A 9.68% dip on Monday was one of the biggest of the intraday session but the bulls showed more resilience the next day was marked by a considerable change in price.

STX had it largest correction of the week on Wednesday as the coin retraced from $0.57 to $0.52, losing more than 12% of it value per unit. The next downtrend was on Friday as the asset lost almost 6%.

The weekend was bullish for stacks as it gained more than 11%. RSI peaked at 35 and further uptrends were assured due to a bullish divergence in MACD. The Relative Strength Index at this time is stable at 39.

A closer look at the Moving Average Convergence Divergence (MACD) reveals that the asset may continue to enjoy more price increases.